It came down to the wire on Friday, with Key West Conchs taking victory on a dramatic walk-off single in the late innings that sealed their victory over Barron Collier. The game was tied at six with Key West Conchs batting in the bottom of the eighth when Brendan Roney singled on a 2-1 count, scoring one run.

There was plenty of action on the basepaths as Key West Conchs collected 11 hits and Barron Collier had ten.

Barron Collier fired up the offense in the first inning.

Key West Conchs knotted the game up at six in the bottom of the sixth inning, when Dane Black singled on the first pitch of the at bat, scoring one run.

Dale Michaud took the win for Key West Conchs. He went two and two-thirds innings, allowing zero runs on two hits, striking out four and walking one.
Conner Phelan took the loss for Barron Collier. He allowed eight hits and four runs over three and a third innings, striking out three. 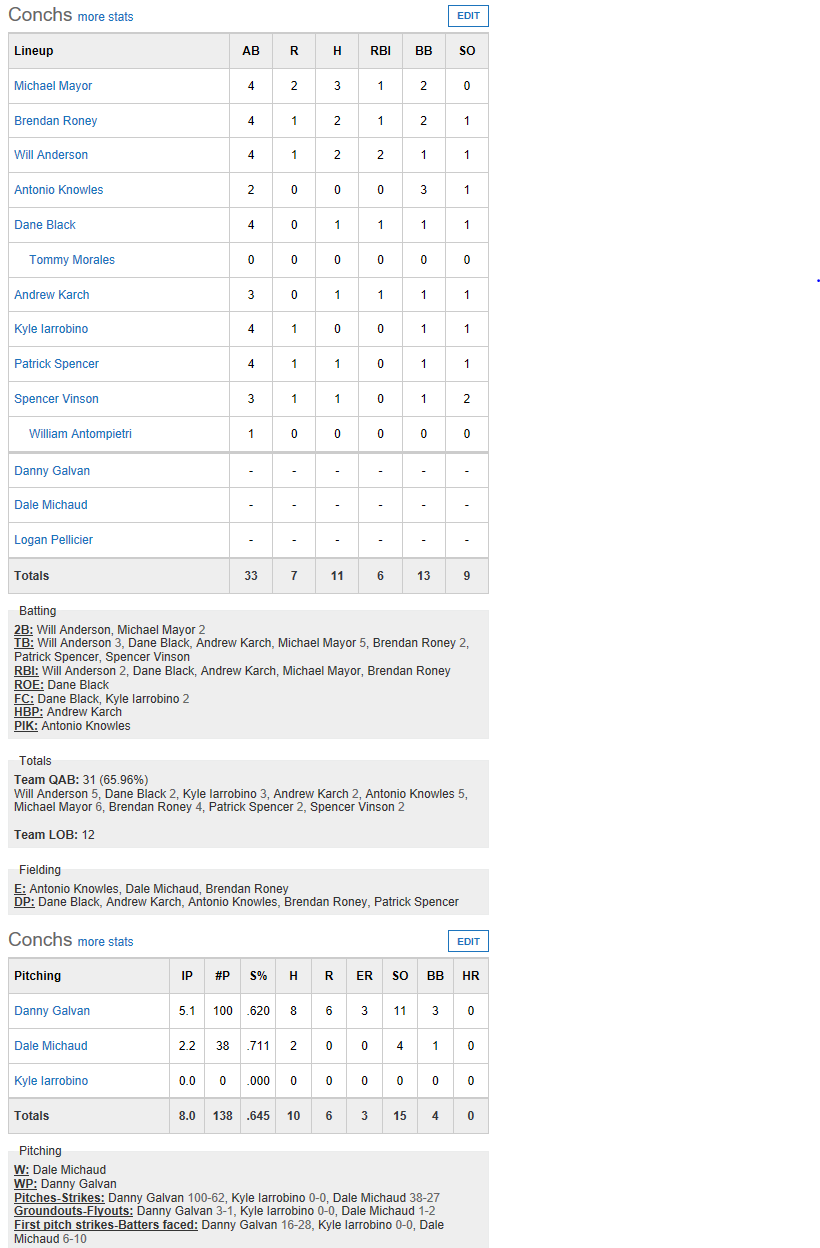 ConchBall 18U walked away with another win led by strong pitching and key hits from Jordan Parks and Jacob Lojewski . #ConchBall #GoConchs ...

Great Day at The Plate for Shortstop Michael Alfonso. He went 2 for 2 with a 💣 and 4 RBIs.#ConchBall ...

62 0
View Open
Follow us on the GameChanger App. #ConchBall

Congrats To Brendan Roney, Dane Black, Preston Herce, and Michael Alfonso on being selected to The 2020 4A-16 All-District Team. #GoConchs
#HSBN #ConchBall hsbnflorida ...

Monday at The Office with Landon Lowe👏 #ConchBall ...

123 0
View Open
Happy Fathers Day! Thank you for all that you do.

Happy Fathers Day! Thank you for all that you do. #GoConchs #ConchBall ...

It was such an awesome Weekend for our ConchBall Organization and players. We traveled with our 18U and 15U squads to Auburndale, Florida to compete in the PGBA Tucci Lumber Wood Bat Tournament. Both teams competed against some of the best Travel programs and Players in the country. ConchBall was the talk of the tournament. Our 18s have started to create buzz for themselves individually amongst some of the Nation’s Top College Baseball Programs. ConchBall 15U showcased a very young talented group of players with a lot of potential that will continue to develop personally and as a team. We really believe in our 15U players and their talent. Conch Fans should really be excited for the Future of Key West Baseball. #ConchBall #GoConchs ...

Conch Ball 15U gets a big W against a very good FTB program!! #GoConchs #Conchball ...

Conch Ball 18u getting back into swing this morning in Auburndale, FL With a W!! #GoConchs #Conchball ...

CITY PREPARING FOR A RETURN OF VISTORS

A TRIDENT APPROACH IS NEEDED FOR RECOVERY FROM COVID-19